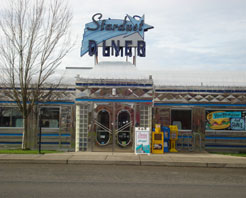 Stardust Diner is a classic chrome and neon roadside diner in Vancouver, WA serving up hot American classics for breakfast, lunch and dinner. Pop down into a booth for breakfast and enjoy some hot cakes and coffee, and finish it off with a sweet dessert in our hand-spun milkshakes. The locals are calling Stardust Diner a Vancouver staple for breakfast. Come in and see what all the buzz is about at Stardust Diner!
American
- $$

You Are Sure To Start Your Meal Off Right With One Of Our Great Appetizers, They're Dreamy

$4.59
the most popular onions ring ever made. thick slices of crisp onion double dipped in beer batter

$4.59
these are not to be missed! real bacon and savory bleu cheese, cradled in a red jalapeno pepper and given a classic crumb breading

$5.29
ask your server what the soup of the day is your choice of soup and a garden fresh dinner salad

$6.99
choice of beef or chicken on a bed of salad greens, with tomatoes and shredded cheddar cheese. served in a crispy tortilla shell with salsa and sour cream

$2.59
bed of crisp greens and your choice of dressing

$4.69
a side salad served with your choice of dressing and a delicious bowl of homestyle soup

$4.99
on sourdough bread with one side

served with one side

$4.99
served on multi grain bread with one side

$12.99
new york steak dusted with our diner seasoning and topped with onions. served with a baked potato, steamed veggies and corn bread

$9.99
bigger than anything you've ever seen smothered in country gravy, served with mashed potatoes, steamed veggies and corn bread

$8.99
served with mashed potatoes, steamed veggies and corn bread. a must try for all diner goers

$8.99
served with choice of potato, cole slaw and cornbread

Served With Dinner Roll And Vegetable. Add A Cup Of Soup Of Dinner Salad - $1.29

$6.99
marinated boneless skinless, grilled breast of chicken, with choice of fries or mashed potatoes and gravy

Two Eggs Any Style, Hash Browns Or Country Potatoes And Your Choice Of Toast Or Biscuits. Substitute Pancakes For Hash Browns And Toast Add Green Pepper And Onions - $0.99

Our Pancakes And Waffles Are Light And Fluffy, Served With Butter And Maple Syrup, Lite Syrup Upon Request. Add One Egg And Two Strips Of Bacon Or Two Sausage Links - $2.29

$8.49
roasted daily at the stardust to be as close to thanksgiving as possible. ask for cranberry

$7.99
seasoned mayo and a blend of sauteed mushrooms and garlic on a toasted sesame seed bun

$7.99
our famous burger served on a toasted sesame seed bun with applewood bacon

$6.69
our homemade meatloaf on toasted white bread topped with lettuce, tomato and mayo

$7.69
your choice of stardust roasted turkey or beef, country ham or tuna, piled high served with cheddar, swiss or american cheese, lettuce, tomato and mayo on your choice of bread

$7.69
all our homemade are house roasted favorites, your choice of meatloaf, turkey or beef, served open faced on white bread with mashed potatoes and covered with gravy

$7.99
lightly battered and fried golden brown and served with lettuce, tomato and house tartar on a grilled french roll

$7.29
stuffed with green peppers and onions, cheddar and topped with salsa sour cream on request

$3.99
with hash browns and one slice of toast

$3.49
vanilla ice cream with your choice of topping whipped cream, nuts and a cherry

$2.99
chocolate or vanilla or cherry

$8.99
our chicken fried steak covered with country gravy. served with two eggs any style, potatoes and toast or biscuits

two large eggs with your choice of bacon or sausage and our own special country gravy and biscuits
$6.99
Substitute Ham For Bacon Or Sausage $0.99

Sorry, No Substitutions, Discounts Or Coupons On Specials $4.99

$4.99
with bacon, cheese and potatoes

$4.99
two slices of french toast with two strips of bacon

$4.99
served with one egg any style and two strips of bacon or sausage

a two egg omelette with cheddar cheese. served with hash browns and a slice of toast

one pancake, two eggs and two strips of bacon

one egg served with hash browns or cottage cheese, two bacon or sausage and a slice of toast or a biscuit

All Skillets Served With Two Eggs And Your Choice Of Toast

$8.29
if you love meat, you'll love this creation diced bacon, ham and sausage with onions all mixed together with our green onion country potatoes, topped with cheddar cheese and jack cheese