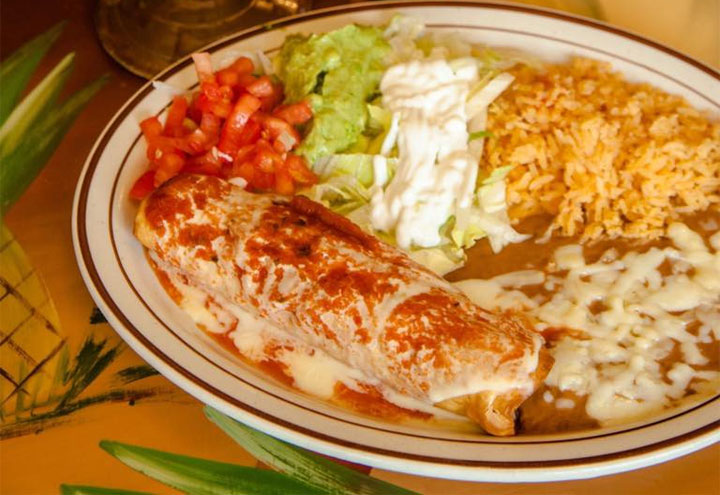 Flavors on the menu also carry the authenticity of Mexican cuisine, from Spanish rice to queso fresco topping the refried beans, cilantro and onions scattered atop a taco plate including steak, chorizo, and seasoned chicken on flour or corn tortillas, as well as a variety of margaritas.
Mexican/Southwestern
- $$

$7.99
We add crumbled Mexican sausage to our rich cheese sauce, garnished with chopped tomatoes and served with chips

$5.99
Breaded and deep-fried till the outside is crispy and golden and the inside is warm and gooey. Delicious!

Tender beef, chicken or shrimp sizzled with onions, tomatoes and green peppers, served atop greens in a large taco bowl. Garnished with cheese, guacamole and sour cream
$10.49
With Shrimp $11.49

$12.50
A beautiful salad of plump bottled shrimp over greens with tomatoes, onions and avocado

$8.99
Beef or chicken, sizzled with tomatoes, onions, and green peppers top greens in a taco bowl with cheese, guacamole and sour cream

$8.99
Deep-fried shrimp with it's own special batter with tomatillo sauce and rice

$8.99
Big burrito with egg-chorizo topped with bacon and cheese

$3.99
Wrapped in a flour tortilla and served with French fries

$4.99
With savory taco meat and cheese

Lunch by the Numbers

$6.99
With refried beans and guacamole salad

$6.25
With Mexican rice and refried beans

$7.49
With choice of Mexican rice or refried beans

Taco, One Enchilada and Tostada with Cheese and Beef

One Beef and One Cheese Enchilada, Rice and Refried Beans

$4.99
Creamy cheesecake wrapped in a pastry tortilla, fried until flaky and golden, then dusted with powdered sugar

$4.50
We wrap a fresh banana is a tortilla, fry it crisp and dust it with powdered sugar. Plated with a dip of ice cream, topped with whipped cream

Beef with Lettuce and Cheese

$9.25
Cheese quesadilla stuffed with your choice of ground beef, beef tips, shredded beef or chicken. Served with lettuce, sour cream and diced tomatoes, plus your choice of beans or rice

$12.99
Choice of fajita-style beef or chicken with onions, peppers and tomatoes stuffed in two flour tortillas and lightly grilled

$13.99
Chicken, chorizo, bacon, pineapple wrapped in a tortilla served with rice and salad

$12.99
This chicken breast is fried up with our spicy diabla sauce. Served with rice, beans and three flour tortillas

$12.99
A beautiful plate with grilled chicken and cheese. Served with rice

$14.99
An especially good dish of grilled chicken breast topped with shrimp and covered with cheese sauce. Served with rice and grilled onions, tomatoes and zucchini

$14.99
Sweet and tender shrimp cooked in a spicy sauce and served with rice, beans, guacamole salad and three flour tortillas

$14.99
Shrimp grilled to perfection with onions and a touch of garlic. Served with rice, beans, avocado, tomatoes and three flour tortillas

$13.99
A beautiful plate of grilled shrimp topped with cheese and served with rice

All fajitas include refried beans and Mexican rice

$10.99
Vegetarian fajitas with mushrooms, bell pepper, onions and tomatoes served with your choice of flour or corn tortillas

$15.99
Tender and Juicy! This classic cut of pure beef is cooked to order and served with avocado salad, Mexican rice, refried beans and three tortillas

$13.99
A tasteful combination plate of one chile poblano, one steak or chicken quesadilla and fried shrimp. Served with rice

$10.99
Three chopped steak tacos in corn or flour tortillas with lettuce and cheese, rice and beans

$10.99
Three grilled tilapia tacos with lettuce and cheese, rice and beans on the side

$10.50
Shredded pork cooked with lettuce and cheese. Served with special sauce, rice and beans on the side

$10.99
Three enchiladas: one each of chicken, cheese, and beans, topped with shredded cheese, sauce, guacamole and sour cream. Served with mexican rice and refried beans

$12.25
Three cheese enchilada topped with pork and chile verde with rice and beans

$11.25
Five enchiladas, one each beef, chicken, shredded beef, bean and cheese. All topped with cheese, lettuce, tomatoes, sour cream and our special sauce

$16.99
A juicy T-bone steak with shrimp topped with onions, mushrooms and cheese sauce. Served with rice

South of the Border

$10.99
One steak taco, One grilled chicken taco and one chorizo taco served with onions, cilantro, rice and beans

$9.99
Fried tortilla chips blended with our special sauce, topped with grilled chicken or beef and cheese

We load your plate with a bean burrito, a cheese enchilada a tostada, beans and cheese

Triple your dining pleasure with a quesadilla bean burrito and chalupa

Enjoy a bean burrito with ancho cheese, an enchilada and a quesadilla

An all-time favorite! We stuff a quesadilla with sauteed mushrooms and melted cheese

$11.99
Two burritos stuffed with beans and your choice of beef tips or chicken. Topped with nachos cheese sauce and served with guacamole salad, rice and beans

$10.99
Two beef burritos served with rice and beans. The big one!

$12.25
A large tortilla stuffed with steak, rice, beans, lettuce, sour cream and pico de gallo. Served with a chipotle sauce on the side

$10.50
Two burritos (one chicken & beans and one beef & beans) topped with lettuce, tomato and sour cream

$10.99
One beef burrito with rice and beans and one chile relleno

$13.25
Steak & shrimp with lettuce, cheese, and pico de gallo, served with side of rice and beans choice of soft, medium and hard shells

$14.25
Breaded chicken breast in a burrito / shrimp / bacon, avocado. Served with rice and a cheese dip

These margaritas are served on the rocks

$7.99
An oh-so-smooth blend of tequila, blue curacao, sweet and sour and orange liqueur

$7.99
A blast of the tropics! Tequila, orange, liqueur, sweet and sour and pineapple juice

$8.99
Get your taste buds doin' the mango tango with this one, featuring the smooth taste of margaritaville Tequila

$8.99
Enjoy a taste of the Island Coconut rum, sour mix and blue curacao

$9.99
Fruity and refreshing made with tequila, pineapple juice, rum and cranberry juice

$8.99
Made with tequila, pineapple and orange juices with a dash of grenadine. It's like having a punch with a kick

$7.25
Tequila is made by fermenting and distilling the agave plants sweet sap called "aguamiel" or honey-water", It originated in the town of Tequila, in the Mexican state of Jalisco. Try an old favorite or sample something new! Cazadores, Don Julio, 1800, Sauza Hornitos. Tres Generziones, Corralejo, El Jimador, Cabo Wabo, Jose Cuervo Traditional and much more