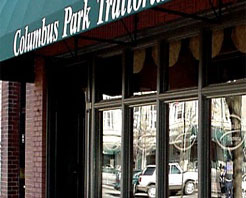 What began as a small family business has now grown to include three very successful restaurants in the Fairfield county area. The Marchetti - Tarantino family, who hail from Gravina in Puglia in southern Italy , started with their first restaurant, Maria's Trattoria in Norwalk , in 1983. The dynasty continued with the much acclaimed Columbus Park Trattoria in Stamford in 1985, and Osteria Applausi in Old Greenwich and Tarantino Restaurant in Westport in 1994. From the very beginning the ingredients were simple and fresh and that has remained the secret to their enormous success. At every Marchetti-Tarantino family restaurant you will find homemade-handmade pastas, the choicest cuts of meat and the freshest market fish. In addition all of the customers are treated as a true part of the family. Your dining experience will be enhanced by the professional wait staff and talented chefs. With every visit you will be transported to enjoy the delightful tastes of the family's hometown and to the other beautiful regions of Italy . Please come and join in the fine food and wine and a celebration of the culinary delightful tastes of life. The Restaurant, For the authentic flavors of an Italian kitchen, look no further than Columbus Park Trattoria-one of three Marchetti-Tarantino family owned and operated restaurants in Fairfield County . Located in the heart of downtown Stamford , Columbus Park Trattoria offers an exceptional menu of regional and national Italian dishes; they include signature homemade handmade pastas made on the premises, fresh fish, and meats. The Marchetti-Tarantino family is from southern Italy in the region of Puglia . They recognize their home town of Gravina in Puglia as the main inspiration for Columbus Park Trattoria and their other two restaurants: Osteria Applausi in Old Greenwich, and Osteria Tarantino in Westport .
Italian
- $$$$

$9.50
tender squid served either fried or grilled with a red pepper and thyme vinaigrette

with shaved parmigiano or gorgonzola add $1.50, with goat cheese add $2

$7.00
arugola, radicchio, and belgian endive with our balsamic vinaigrette

$7.00
mesculin greens with our balsamic vinaigrette

$15.50
linguine with tuna and capers in a light tomato sauce

$18.50
filet of salmon grilled to perfection

$6.50
broccoli-rape sauteed with garlic and oil

$12.50
tender squid served fried, or grilled with a red pepper and thyme vinaigrette

$16.00
thin slices of veal topped with a caper and tuna mayo

$17.50
crepes filled with sautéed lobster served over a velvety cream sauce with a hint of brandy

with shaved parmigiano or gorgonzola add $1.50, with goat cheese add $2

$8.50
mesculin greens with our balsamic vinaigrette

$9.00
arugola, radicchio, and belgian endive with our balsamic vinaigrette

$18.50
rigatoni with bacon, onions, cream with a touch of tomato and a splash of vodka

$25.50
handmade pasta with mixed seafood and cannellini beans with a splash of white wine

$9.00
broccoli-rape sautéed with garlic and oil

$8.00
delicate chocolate mousse on a chocolate sponge base covered with a light coat of bitter chocolate

ask your server what is being poured

The following are native Italian varietals that represent the style of wines that pair beautifully with seafood, hard cheeses, and light pasta sauces. Some of these are not well known but they represent a delightful alternative to Pinot Grigio. They are crisp and refreshing with mineral, peach, apple, and lemon notes. CORTESE, VERNACCIA, CODA di VOLPE del VESUVIO, ARNEIS, GRECO.

Crisp, high in acidity and light to medium-bodied, Sauvignon Blanc is recognizable for its grassy, herbaceous flavor and aroma. When grown in warmer climates the flavors are more fruity and melon-like. We have chosen to highlight the style of this grape when grown in California, New Zealand and Northeastern Italy. When pairing this wine think acid, such as salads (dressings), lemon or citrus sauces, spicy dishes, and grilled fish.

Pinot Gris is a darkly colored white wine grape that evolved from the Pinot Noir grape. Originally a popular wine from Alsace (where it was once labeled Tokay) and northeastern Italy (where it is called Pinot Grigio), it has become one of the most successful wines grown in Oregon. Most versions are quite dry, but Pinot Gris wines can range from light and delicate to fairly full-bodied. Pair this wine with salmon, shrimp, calamari, cockles, and our goat cheese stuffed chicken breast. We have included TOCAI in this category because it is also native to the Friuli. These wines also have wonderful floral and light citrus flavors but tend to have a fuller, richer body and more spicy notes.

Chardonnay is to white wine what Cabernet is to red wine. It is used to produce France's magnificent White Burgundies and is the main grape in Champagne. When chardonnay wines are made well, they are bold, rich, and complex and taste of ripe figs, peaches, honey and butter, hazelnuts and spice. The best are medium-bodied, medium dry and high in acidity. Chardonnays, more than any other white wine, love to be aged in oak. Pair with gnocchi, spinach ravioli, and most fish.

A Taste Of Terrior

Terrior? In short, when wine geeks say "terrior", we mean you can actually taste the land, the soil, and the style. The "earth" comes through in every sip and there is a true sense of place. Nothing is more beautiful than tasting the essence of where the grapes come from. In fact, this is often the case for most Italian wines and that is why we get so specific with regions. In this case we have highlighted a few varietals and styles that are simply unique and deserve their own space or "terrior", if you will! CABERNET FRANC, CORVINA, MONTEPULCIANO, NEGRO AMARO, SAGRANTINO.

This varietal is named for the dense fogs prevalent in the vineyards of Piemonte, in northern Italy where it is almost exclusively grown. Nebbiolo is responsible for some of the worlds finest and longest-lived wines. These Nebbiolo based wines are known by the areas in Piemonte where they are grown: Barolo, Barbaresco, and to a lesser extent Ghemme and Gattinara. Nebbiolo generally makes powerful and intense wines, although generally with medium body and color. They often have aromas and flavors of raspberries, plums, earth tones, roses, and tar. Pair with prosciutto, veal shank, rosemary lamb, or broccoli rape.

This Italian varietal is planted primarily in Piemonte, but has traveled widely, primarily to California. Barbera can be used to make an incredible range of styles, ranging from young and spritzy to powerful and intense wines that need extended cellaring. It is a deep ruby color, full bodied, with low levels of tannins balanced by higher levels of acidity. Barbera is characterized by bright berrylike flavors and is one of the best alternatives to Merlot. Pair this with veal, vodka cream sauces, wild mushrooms or lamb.

To grape growers and winemakers, Pinot Noir presents both the ultimate challenge and the ultimate reward. At their best, Pinot Noir grapes produce wines that are rich and complex, tasting of black cherries, red berries, earth tones and spice, with an aroma that's been likened to everything from herbs and cola, to bacon and roses. One of the most exciting developments in the world of wine is the recent advances Oregon and California winemakers have made in producing first rate Pinot Noirs. Pair with mushroom pasta, grilled fish, salmon, and veal.

Sangiovese along with the Nebbiolo, is one of the most important grapes in all of Italy. It flourishes in central Italy but is best known in Tuscany. Like Nebbiolo, Sangiovese is responsible for some of the finest wines in the world, including Chianti, Vino Nobile, and Brunello. Along the way there are numerous iteration of this grape. Depending on where in Tuscany you are, whether you are north or south of the Arno, closer to Florence or down the valley nearer Siena. Whatever the case, most will agree that Sangiovese is unique in its aroma and flavor which undeniably root this grape in Tuscany. The wines that it produces have a natural austerity from the high acidity and tannin. A good Chianti, Brunello, or Vino Nobile evokes a smoky, foresty quality which mingles the sweetness of the fruit along with spicy herbal undertones. Pair with roasted meats, rich pastas, and cheeses.

In the 1970's, certain progressive winemakers decided to push the traditional barriers and experiment with blending different varietals to make wine greater in structure and complexity. These wines typically blend Cabernet Sauvignon, Merlot, and Sangiovese, but do not exclude other varietals. The following are wines that we feel represent the intent beautifully.

Syrah is a rich, full-bodied, complex, spicy, long-lived wine that thrives in warm regions. American Syrahs can be full bodied wines but often show more spice elements and less berry-like fruit than a Zinfandel for example. We have also included Petite Syrah in this category. Some 200 or so years ago the In this group, along with one American Syrah, you will find an Australian as well as two Italian wines that are Syrah blends. Try them all and taste the similarities as well as the differences.

This is the grape responsible for some of the finest wines in the world. It produces wines that astonish with their richness and complexity. The classic Cabernet flavor is one of deep, dark fruits, primarily black currant (cassis) and the best are medium to fullbodied, intense and firm. These wines are rich, and therefore need food equally as rich, such as stews, red meats, salty items like prosciutto or pancetta to help mellow the tannins.

Merlots are often less tannic and fruitier than Cabernets, though still full bodied, deep in color and fairly high in alcohol. Typically merlots are ripe with flavors of cherry, plum, and chocolate. Merlot is very often blended with Cabernet Sauvignon at almost all of the great estates. In doing so, the wines become substantially richer and elegant and more importantly it renders the wine much more complex. Areas where Merlot has been successfully grown and blended into the Cabernet grape include; Northern Italy, California, Washington State, and the Rogue Valley region of Oregon. Pair with rib-eye steaks, filet mignon, and other braised meats.